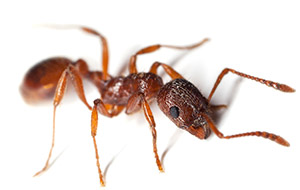 Argentine ant colonies live in moist areas near a food source, often in damp soil next to buildings, along sidewalks or beneath boards. They deposit trails continuously to ensure they do not waste time visiting the same area for food. When outdoor conditions are too wet or dry, Argentine ants invade buildings by trailing along plumbing pipes and shrub branches, utility lines and wires. They are very aggressive and will drive out native species of ants, making argentine ant control difficult.

Omnivorous; they prefer sweet foods such as the honeydew produced by aphids and mealybugs, but will eat almost anything, including meats, eggs, oils and fats.