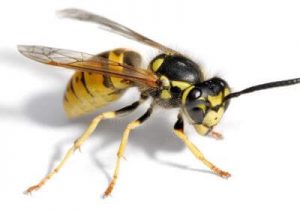 Golden yellow with black markings; most species are about 3/8 to 5/8″ in length.

Yellow jackets are found near humans most of the time and are most active in late summer and early autumn when a colony is at its peak. They build paper nests out of chewed up cellulose on eaves, in attics, in the ground, or other similar cavernous areas.

Yellow jackets feed on sweets and proteins, which is why you’ll see them at picnics or other similar outdoor events.

Yellow jackets are significant threats due to the fact that they can sting repeatedly and are very territorial. They can also do some serious damage to the structure of homes once they get in and build nests inside wall voids. If you see these wasps going in and out of an opening on the outside of your home or business, it generally means there’s an established nest that’s thriving inside the wall void. It’s important to seek professional expertise to avoid being stung and to pinpoint where the colony is to get it properly treated. Yellow jackets can be a difficult pest to control if you aren’t familiar with their habits. Sealing off an entry could push a colony further into living spaces indoors without treating the nest first.