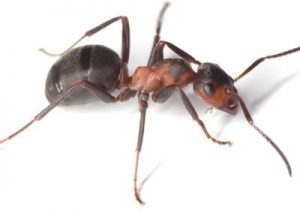 Among the largest of ants, 1/4 to 1/2″ long. The most common species is black, but some are dark red or brown.

Carpenter ants are the most common property pests in the Midwest. Home and business owners are far more likely to face an invasion of carpenter ants than termites.

Carpenter ants get their name because they excavate wood in order to build their nests, leaving hollowed-out tunnels. These colonies require a constant source of water to survive, and are often found in wet, decayed wood such as dead limbs and tree stumps. Inside, they can be found in overly wet, poorly ventilated spaces such as crawl spaces or attics. While carpenter ants don’t eat wood, their excavations pose a property threat, making ant control imperative. In the spring, winged reproductive ants called swarmers fly out to start new colonies.

Will feed on nearly anything people eat—particularly sweets and meats. Will also feed on other insects. Carpenter ants do not eat wood. They just chew through it.

Successful carpenter ant control depends on eliminating the parent colony, which is usually located outdoors. Finding and treating as many satellite nests as possible is the key to effective carpenter ant control. Sometimes, a property can have several nests besides the main colony site. Because it can be difficult to detect these all at the same time, an ongoing pest program will ensure that any activity is addressed immediately to keep the population under control.