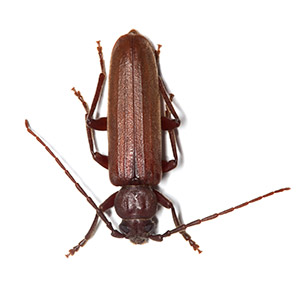 Flour beetles are scavengers that cannot attack whole grains—they must rely on other insects such as rice weevils or lesser grain borers to first damage the kernels. They are known as “bran bugs” because of their preference for flour and flour by-products. They’ve also been known to infest nuts, cereal, spices, and other grainy dry stored products.

Discard all infested packages. Clean spilled grain and infested cabinet areas using a vacuum followed by soapy water. Store all dried food goods in zipper plastic bags, or a glass or plastic container with a tight lid to limit spreading if one food item becomes infested. Consider storing cereals and similar foods in the refrigerator to limit stored pantry pest problems. Wipe all sides of shelves with household cleaning solution and pull out stove and refrigerator to access and remove possible food debris beneath appliances as well. Eliminating the insect’s food source is a good start to getting rid of confused flour beetles.