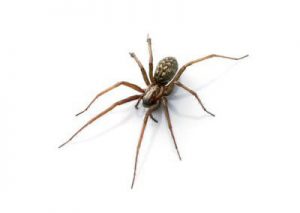 Typically brown or tan with various markings; the body ranges up to 3/8″ in length, with a spherical abdomen.

This is the spider most commonly found indoors. It is more of a nuisance than a threat, probably more because of its webs than the spider itself. Indoors, house spiders are most likely to be found in upper corners, under furniture, in closets, around window frames, and in basements, garages and crawl spaces. If a web does not yield prey it is abandoned and a new site is selected. Eventually, successful webs are constructed where air currents bring in prey. Due to their low humidity and few insects, modern homes have fewer spider control problems than in the past. Spider control is more an issue in garages, sheds, barns and warehouses.

Like all spiders, house spiders are predators that will kill and eat almost any insect.

Regular removal of spider webs is the most effective spider control method. Homeowners should also seal up cracks around windows and door to help prevent their entry. Switch exterior lights to the yellow “bug” light bulbs, which attract fewer flying insects on which spiders feed. Professional spider control treatments, especially of exterior spider nesting sites, can help reduce the number of spiders when combined with an overall pest management program.