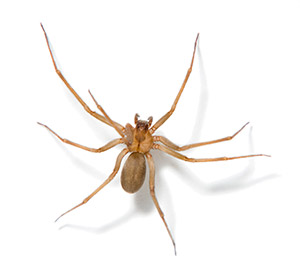 Adults are 6-12mm in length with a tan-brown coloring and a pattern on the thorax resembling the shape of a violin. The eyes are arranged in three pairs forming a semi-circle. They are not commonly indigenous to the Midwest, but may be transported.

It is very rare to encounter a brown recluse spider. Chances are, if you found a spider in your home that is light brown, it’s most likely not a brown recluse. They live in dry areas with little to no airflow and no activity. They are extremely reclusive creatures and won’t live in harmony with active humans or activity of any sort, thus the name.

Brown recluse spiders will kill and eat almost any insect.

Once an infestation has been allowed to get worse, gaining control, because of this spider’s reclusive habits, may take up to 6 months or even longer. Specifically for this spider, cedar shake shingles should be inspected and a residual product should be applied to the exterior surface of them. Removing spiders, their webs, and egg sacs can keep a population in check. Because the spiders can go for long periods without food or water, controlling the population of its prey is a long-term solution.

Sealing cracks and gaps in the exterior of the building will greatly reduce likelihood of spiders gaining access to your home. Reducing clutter and places for these insects to hide will make your environment less appealing for the spiders.

This spider is a health concern because of the venom, which it injects into its prey and occasionally into humans who disturb it. This venom causes necrosis at the bite site and the tissue systematically dies around it while the victim also suffers from fever and inability to sleep.