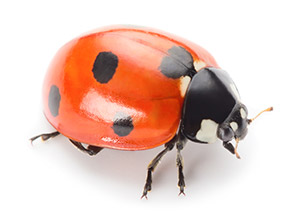 Like box elder bugs and cluster flies, Asian beetles congregate on the sunny south and west walls of buildings in early autumn, attracted to the warmth. They crawl into cracks and crevices on the outside of buildings and stay there for the winter out of the colder elements. On warm days, they wake up and emerge to bask in the sun. Originally introduced to North American from Asia in the early 1900s, these insects were used to control aphids and scale insects on plants and crops. They do a great job at controlling those plant pests, but have now become pests themselves as they invade homes each year when crops are harvested.

Asian beetles prey on aphids and other plant pests, so they are found on a wide variety of plants outside.

The key to controlling an Asian beetle population is to focus on prevention as best as you can. Seal as many cracks and holes on the outside of your home as possible, especially on the south and west walls where the sun heats the home during the late summer and fall. Make sure that all foundation and attic vents have tight-fitting screens, and check the soffit vents and any turbine vents on the roof. The outside west and south walls of your home near the eaves can be treated if necessary.