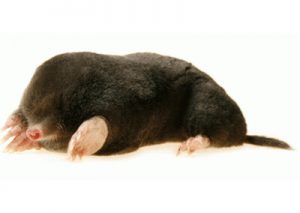 Dark gray fur, long cylindrical body ranging from 4-6 inches, tiny eyes with which they can barely see, an extra thumb on each forepaw (polydactyl) for extreme digging skills, and an uncanny sense of smell.

Moles are solitary creatures unless mating. Males tend to fiercely fight if they meet. They prefer woodland, grassland, and farmland terrain. They spend most of their lives underground in their tunnels hunting earthworms and are able to tolerate higher levels of carbon dioxide than other mammals.

Moles are well known for the damage they do to landscaping and terrain. Dirt mounds (resemble volcanoes) and surface tunneling (looks like veins) can ruin a homeowner’s landscaping or cost a business thousands of dollars if someone were to get injured on their property. To gain effective control over a mole infestation, a well-plotted assessment and baiting plan of action should be put in place immediately. Expect several visits, if not an ongoing maintenance plan, to knock down the population and maintain a mole-free property.