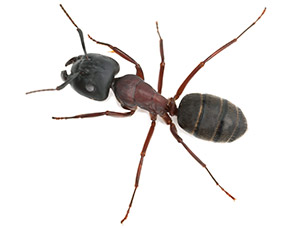 Big headed ants enter buildings occasionally, preferring to nest in protected soil such as under stones, leaf litter, mulch, patio blocks, slabs and firewood. These ants are also commonly found inside the soil of potted plants, and many big headed ant control problems may be traced to planters. As the name implies, the major workers’ heads are very large in proportion to their bodies.

This species likes to feed on a wide variety of foods including dead insects, plant materials and garbage. The workers are partial to the sweet honeydew produced by aphids, scales and mealybugs. Inside, they forage for meats, grease, liver, molasses, peanut butter, pet foods and fruit juices.

Because big headed ants are soil nesters, their colonies are often easy to see due to piles of displaced soil formed as they excavate tunnels in the ground. Most colonies are small and relatively easy to treat with professional products, but treating infestations involving multiple colonies requires specialized ant control expertise.